Evocative Objects was funded by the AHRC Connected Communities Festival and coordinated by the research team from Amateur Dramatics: Crafting Communities in Time and Space. We invited people who are dedicated and passionate participants in the world of amateur theatre to come along to two workshop days and bring with them an object which captured memories and stories about their experience.

As a research team, we were overwhelmed by the richness of the objects that people brought – not particularly their monetary value – but a more social and personal richness of story, of dedication, of lifetimes of service to a sector which has received very little formal academic recognition. In many cases, these objects captured generational commitment, within families, and across cultures, cities, and age groupings.

They are only a snippet of a much larger picture, but they evoke much of the passion, hard work, and camaraderie of amateur theatre. Click on each image to read more about the object. 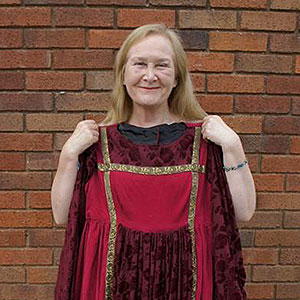 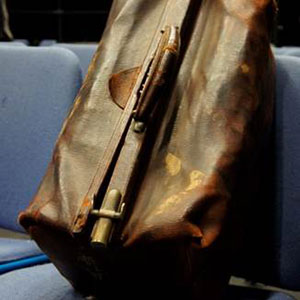 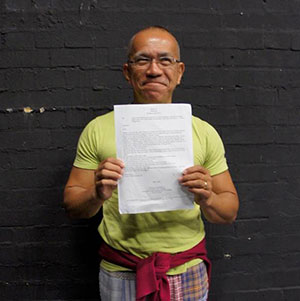 This crown is from our children’s theatre productions, which we’ve been doing for 70 years, from October to May. Of the many plays we have in our repertoire (we’ve been doing it for quite a long time) 7 of them have kings in them. And they get recycled, obviously.

I’ve made a paper-doll-king for each of the kings we have used since the beginning of the century. There are 16 of them, each represents the person who played the part. I’ve played it 5 times. I’ve got a house full of props and costumes, since 1992. But I’ve been doing it on and off since 1975.

I was working as a teacher. I came to the third year of what was the teacher training college in those days, in Worcester, and I came and saw a play. It was done beautifully. And so… I thought I’ve got to get involved.

I’d done drama at school. And had been quite successful at it. In fact, I got into teaching through drama…. But, I was so busy, I didn’t have time. I worked into the evenings. There wasn’t time for me. I got into it again when I retired.

This is my red dress. The reason I like it is that it’s the only thing in this theatre group which has been made for me – specifically. I played the Duchess in Terry Pratchett’s play adaptation of Wyrd Sisters, Discworld. I love that part. We loved doing The Wyrd Sisters. It was such fun to be in. This splendid garment has since appeared in many many more productions, mostly children’s theatre. As you can see, it’s got an extension in the back. It’s been taken up, let down, taken up. But originally, it was mine.

Whenever I do get to wear it in children’s theatre, when I play a particularly horrible queen, which is all I ever get to do. Basically, children don’t like me very much. I have to do the serious parts.

This red dress, it’s a power dress, a commanding dress, a look-at-me dress. Put it on and you feel like a Duchess… a Queen. Cruel or kind? A dress to grow in. Who would dare to contradict me in this gown? Made to fit me – my size, my shape, my personality.”

These are quite wonderful, these trousers, aren’t they? The explanation is that this is my 7th summer season in Paignton, and 6 of those 7, including this one, has starred these trousers. And if I’m honest, I’m really secondary to this role. But if I could be candid, they are a little bit rubbish, aren’t they?

The criteria for these trousers appearing in so many plays from the 1920s to the modern day is that I’m tall and so are they. The judicious use of belt is because braces looked ridiculous. The trousers did tend to move independently of my legs. It’s much better, so I’m told to use the belt, as they’re actually two sizes too big. These actually to tend to end up with me at the end of the summer season, it’s normally, ‘you can take those home, Jon’.

I think burning is probably too good for them.

It is hilarious. We have a costume ﬁtting every summer, prior to the show. I always get invited along to the costume ﬁtting, and I just think ‘Why don’t they just give me the trousers?’

There’s no sentimental value to them, they really should be burned. Last year, I was the hero, wearing them. This year, I’m the git, wearing them. Character development with costume is a bit of an issue at times. Right Jon, I want you to be really smarmy…which of course me is quite natural, then you have to be a hero, but wearing those trousers as well.

Why the trousers? Why not? They have become a standing joke in my mind, but not in a bad malicious way. I wryly consider them the epitome of am-dram. They illustrate all that we have to cobble together, whether it be props that are constructed from blue tac and string or ladies ankle boots made from socks with a cut-out heel. The trousers shout ‘I have no money!’ or certainly very little money – they perform a task, whether good or not is debatable, but they do. 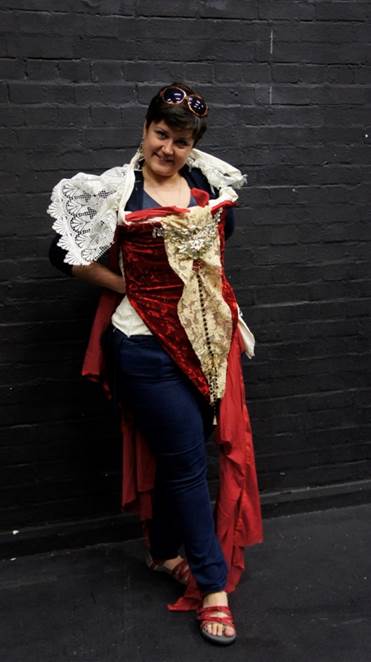 “Acting Out is Birmingham’s only LGBT theatre group.

This chain of photos in the middle is the story of the corset. It starts as my ﬁtting dress for my wedding dress. And then, because it was the ﬁtting one it didn’t matter if I ‘altered it’ – so then it gets transformed to be a good witch in The Wizard of Oz.

Then we see Ifor checking it for size so he could become Queen Elizabeth – which was a work in progress.

All the jewels were added on. Another of our number – she works for the police. They get a load of stuff which is about to go in the skip because it’s stolen. So this is stolen property, which the police are going to throw away, so they go to her and say ‘Ah, your acting group use stuff like that, don’t they?’ A load of bits and bobs – a bit of neckline here to make the ruff, and then fabric, a load of botching to make it… it was worn by Ifor and Matthew. 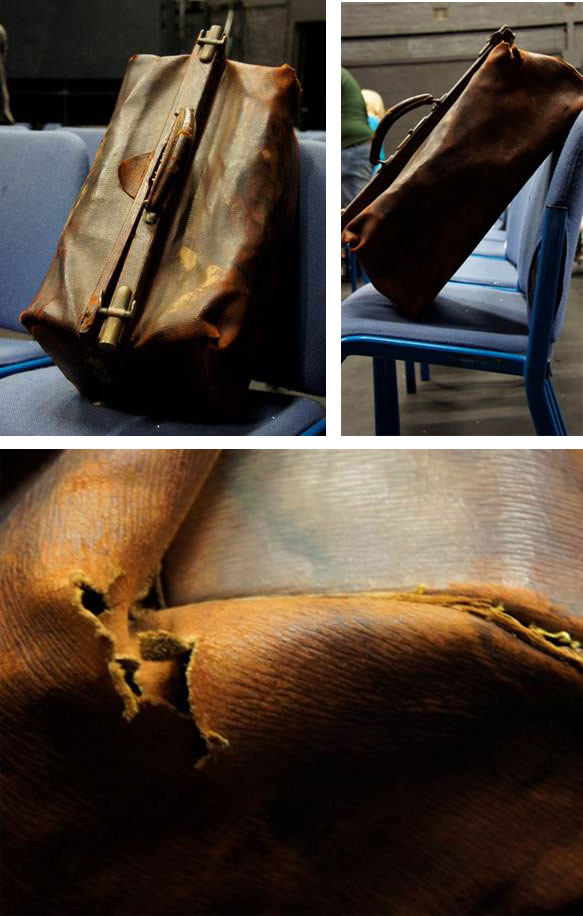 This bag was inherited from my father who died in 2002. He came from a long line of medical men, although not a doctor himself. I cannot say with conﬁdence how many generations it goes back, but certainly it belonged to my paternal grandfather. It has travelled widely, including the Far East and Africa. I have always been aware of its existence but it was only when it passed to me 14 years ago, by which time I was an established member of Questors. Then its theatrical potential became apparent. It has graced Questors stages in both playing spaces many times, including Hedda Gabler, Tis Pity She’s a Whore, Great Expectations, The Importance of Being Earnest, Charley’s Aunt, Travesties, Bloody Poetry (by Howard Brenton). It has been in numerous plays varying from 1600-early 1900s, although it probably actually dates from the last part of the 19th century. I am delighted it has come into its own after decades of disuse. It would originally have been used as a doctors’ bag – at least that is what I have always been given to understand. It is probably the only tangible reminder left of my paternal family’s distinguished medical pedigree. One of my 19th century forebears has a ward named after him in a major London teaching hospital. It has of course seen better days as a cursory inspection will reveal. I suspect it will expire in the service of Questors. It is a question of whether it or I go ﬁrst. 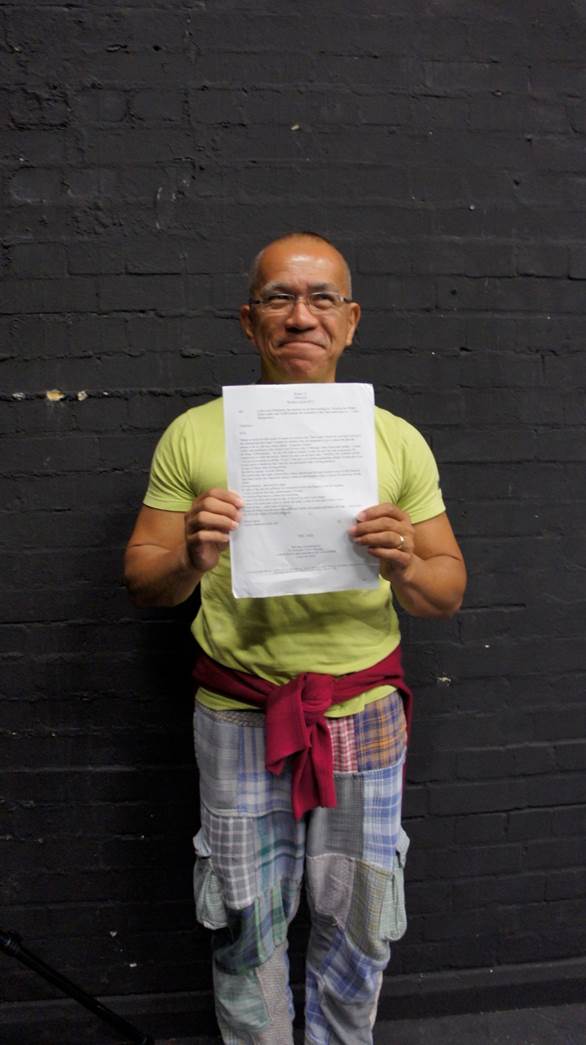 I brought a torn page from the play I’ve written, called Migrants. This is actually the last page, the ﬁnale.

It brings me lots of memories because Migrants is to be restaged this year in November and this copy has been revised and edited several times… or shall we say updated?

So the play is now on its 7th Edition. I thought a torn page of it would be right. I am the founder of PTUK. We started on September 8th of 2002. We’ve done 16 original plays – I’ve written 16 plays now – and all of them have been produced by PTUK.

The theatre itself was conceived with a few friends, a long time ago. Our mission and vision is to create a platform for people who have never done theatre, especially people who just have fun and want to experience the magic of theatre.

We have dropped the word ‘amateur’. Because we always raise the standards of our productions. Also, PTUK is the only Philippine theatre group in all of Europe, and we’re really happy and proud of that achievement.

We are very informal at PTUK. We don’t have hang-ups. We’re not so concerned about titles. One of the advantages of our community theatre is we always have fun. We always try to respect each other’s opinion and cultivate creativity in everything we do.

I was in Wind in the Willows as the barge lady and every night would hand my ‘smalls’ (which were small!) to Toady. Every night, on I went to sing my solo, Toady and the Horse would ping the smalls at each other, which sometimes put me off. To get my own back, I decided to ﬁll my bag of smalls with a pair of bigs!

The bloomers came out, Toady gave me a look (he was back to audience) of ‘What the *&!*%?’ so instead of putting him off, I was the one who corpsed!

This has taught me never to play tricks on anyone during a performance again, because it can backﬁre.

The whole production was something I was very proud of, so it’s a special memory of a special time.”

I’m Bryony from St Michaels Players in Chiswick, which celebrating its 65th anniversary this year.

My object is the wig I bought for my ﬁrst major part I had, which I got because the person who was meant to be doing it was going to be away too much , and I was reading in for them, and the director said, ‘I’m not having it, will you do it?’

So I thought, I need something a little bit more glamourous.

So I bought the wig. It was on the strength of that play, I got a bigger part with Theatre West Fore. And I was away.

So this wig has been worn a number of times by me… it has inﬂuenced my own hair colour over the years.

It was actually worn by a man in Harlequinade. And a lot of laughs it got him, didn’t it?

What I brought here is these sketches: Maurice knows all about these. He sketched these and turned them over to me.

Actually, ﬁrst, I just wanted to dance – as a choreographer. But later they were looking for a backstage manager, so they offered me this job. I don’t want the big responsibilities, so I was really scared at ﬁrst. But they really pushed me, said ‘you can do this’ so I accepted.

This is the sketch of my ﬁrst theatre show I did – From Heaven with Love, which we did at Chelsea Theatre. It’s from scene 1 to scene 14. So… I was, you know, really in this backstage thing.

Sometimes he scolds me. Do this, do this, just to be organised.

I found myself a job.

This site uses Akismet to reduce spam. Learn how your comment data is processed.

Nadine Holdsworth interviews 81-year-old Arthur Aldridge about a career that has moved between amateur theatre and the West End.